Chinese opera is one of the oldest theatrical traditions still being performed today. Since establishment of the Li Yuan opera school during the Tang dynasty (618-907 AD), it has become a form of cultural expression for a nation of different peoples. Folktales and oral legends, which form its roots, have developed into several hundred distinct schools. About a dozen have risen to international prominence today.

One of these is the Sichuan opera, also known as Chuanju - one of the most dramatic, boisterous and vibrant of operas. Sichuan opera is characterized by a celebration of colorful costumes, acrobatic flips and gestures as well as a bag of magic tricks including third eyes, fire-spitting, knife-hiding and face-changing. It is often said that the style of the opera depends heavily upon the temperament of the people, and nowhere is this more evident than in Sichuan, where the love of spice, color and humor clearly seeps into the theatre.

The opera developed out of an amalgamation of styles across southwestern China, from Yunnan and Guizhou to Shanxi. The western provinces were wilder, more diverse and more rural than their neighbors to the east. The operatic style which developed in the west is quick, funny and down to earth - reveling in local dialects and legends - while the eastern styles are concerned with loftier affairs and more nuanced themes.

Kungqu, one of China's oldest operatic styles, originated in the highly refined provinces of Zhejiang and Jiangsu, near Suzhou. The elegance of kunqu found its roots in the intellectuals of the day and expressed itself in allusive and complex language accompanied by quiet strings and minimal percussion.

This style prevailed for hundreds of years until, as legend has it, Wei Changsheng, a master of Shanxi opera living in Chengdu, visited the capital during Qianlong's (1736-1796) 70th birthday and introduced the clapper-opera style, which changed the face of Chinese opera forever.

A distinct part of Sichuan opera involves a storyteller telling outrageous tales to the beat of his clapper. Most clappers speak in a quick cadence punctuated by a thick Sichuan dialect. Itinerant clappers roam the countrysides putting on shows, sometimes accompanied by a troupe of performers spitting fire into delighted crowds and shocking the children with a dazzling display of face-changing - showing all the colors and emotions of the spectrum in the span of a few seconds.

These raucous celebrations in the hills of Sichuan become a bit calmer as they enter the teahouses of the cities where the elderly gather around bamboo tables, chomping sunflower seeds and sipping tea to the high-pitched singing and rapid-fire acrobatics of a show, while ear-cleaners and masseuses tour the audience.

Wei also raised funds to build a temple to the God of Drama on Huaxing Street in downtown Chengdu. The temple became a favorite meeting place for opera performers and other artists, eventually becoming the Yuelai Teahouse in 1909. Yuelai is the oldest standing teahouse in Chengdu and has hosted regular shows to packed crowds since the late 1950s.

The fusion of tea drinking and operatic performance is unshakable even in the most posh venues. A show at Chengdu's Jinjiang Opera Theatre includes as much tea and sunflower seeds as any backstreet teahouse, along with a squad of professional masseuses and ear-cleaners.

Indeed, the show itself takes a backseat to the crowd's antics, with the dialogue and singing being drowned out by conversation most of the time. Only the most hilarious jokes and most dazzling tricks and flips manage to catch the full attention of a packed audience. 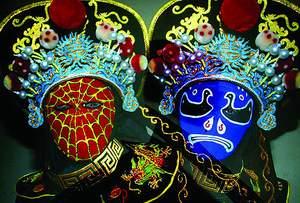 The tricks, of which face-changing is the most famous, are considered such a vital aspect of Sichuan opera's identity that the disclosure of any secrets can raise an uproar all the way from the old man in the teahouse to the provincial governor.

A case in point is Peng Denghuai, a master of the art, credited in the Guinness Book of World Records with the most face changes the shortest span of time: 14 masks in 24 seconds. In 2001, Peng's performances for Hong Kong and Singaporean television and his acceptance of Hong Kong pop star Andy Lau as as an apprentice caused the central government to take notice.

The magic of Sichuan opera was once protected by the State Secrets Bureau, but was then referred to the provincial level during the clamor over Peng's publicity campaign. Since then the secrets of the art may have become accessible to the public, but the skills to actually perform Sichuan opera still require the devotion and passion of an artist.

Established venues for Sichuan opera abound throughout Chengdu. If there is no time to explore the side streets and find a small teahouse with a clapper telling tales, then be sure to visit the Sichuan Opera Academy, People's Park and the Yuelai Teahouse for a dose of Sichuan humor.