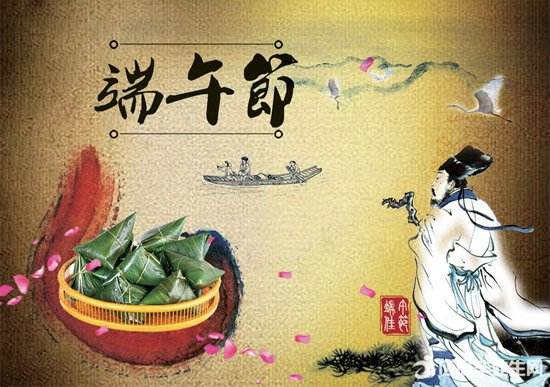 Falling on the fifth day of the fifth lunar month,the Dragon Boat Festival was also called the Double-Fifth Festival in ancient times,just as the ninth day of the ninth lunar month was called the Double-Ninth Festival.It is also called “Duanwu”or”Duanyang”.As one of the three most important Chinese traditional festivals(the Spring Festival,the Dragon Boat Festival and the Mid-Autumn Festival).it is universally celebrated all over China.

The best-known story about the Dragon Boat Festival is related to the commemoration of Qu Yuan(340-278 BC),a great poet who drowned himself in a river in today’s Hunan Province.

Born in the State of Chu in the Warring States Period(475-221 BC),Qu Yuan became a minister in the State of Chu when he was only twenty-two years old.Although Qu Yuan was in the good graces of the King Huai of the State of Chu,an aristocrat named Zilan and a treacherous court official named Jin Shang slandered him on front of king,who finally ignored Qu Yuan’s suggestion that Chu must unite the State of Qi to fight against the State of Qin,the state that later established the first feudal dynasty,the Qin Dynasty.As a result,the king was tricked by Zhang Yi,a persuasive talker,into going to the State of Qin and was held under house arrest.There he was coerced into ceding his territory and yielding his cities.Seriously ill due to anxiety,the king died there before long.When Qu Yuan heard the news,he felt great agony,so much that he requested the subsequnt King Qingxiang to take revenge.But the new king didi not take Qu Yuan’s advice;instead he dismissed Qu yuan from office and sent him into exile as a vagrant.Qu Yuan drowned himself in the Miluo River in 278 BC(When he was 62),along with a forlorn wish to save his beloved country.It is said that he drowned himself in the river on the fifth day of the fifth lunar month,and the native Chu people tried to rescue him in boats,but Qu Yuan had sunk into the bottom when they arrived at the Dongting Lake.This is the origin of the dragon boat race held on this day every year.Suquel to Tales of Qi Xie by Wu Jun in Liang(502-557)of the southern Dynasties(420-589)claims that on this day rice was scattered into the river as a sacrifice to Qu Yuan.It is said that in the early Eastern Han Dynasty(25-220),a man named Ou Qu from Changsha once dreamt of Qu Yuan saying,”The rice thrown in the river as a sacrifice to me has been eaten by serpents.If people would continue offering sacrifices to me,they might want to put the rice inside bamboo tubes along with lily leaves or wrap the rice with reed leaves and tie parcels up with five-colored threads,for serpents are afraid of lily leaves,reed leaves and five-colored threads.”Afterwards,people made sacrifices to Qu Yuan in this way,and the custom of eating zongzi,a parcel of rice wrapped with bamboo leaves and five-colored threads,has been passed down through generations until today.