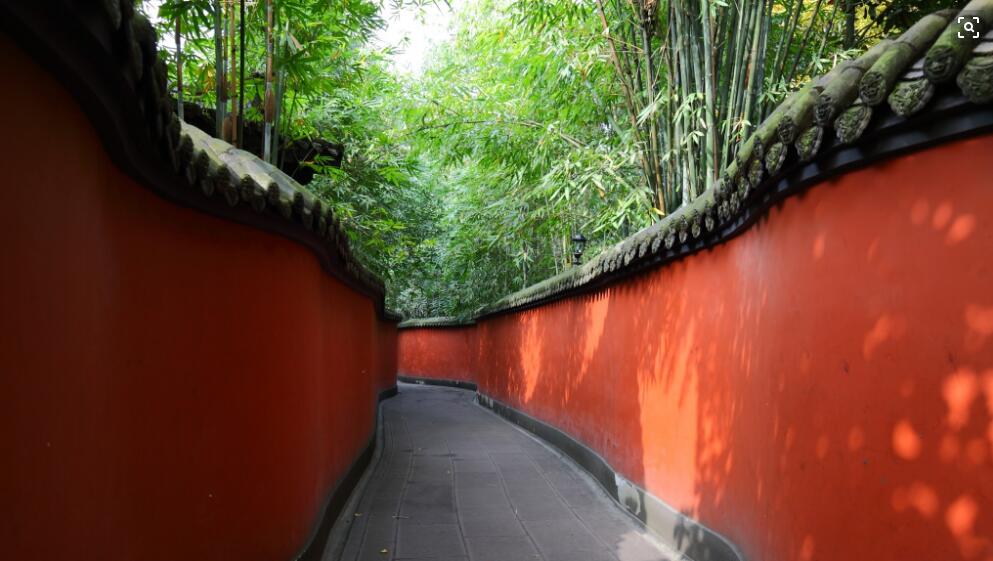 Situated just 15 minutes from the city center by bus or taxi this most interesting Three Kingdoms period museum set in a simply beautiful park surrounded by high red walls, and cyprus trees, is also just a short walk from the very popular Jinli street bazar area. So, make a day of it, spend the morning learning all about Emperor Liu Bei, and a casual afternoon in the facsinating old street district of Jinli.

Housed within the beautiful park-like grounds are 50 statues of Ministers, and other important officials who helped Liu Bei forge his empire. The statues are spread amongst the five focul structures, and peacefully themed gardens which belie the bloodiest (Three Kingdoms) period in China's history, the period during which Liu Bei established, and spread the Kingdom of Shu.

Wuhou which literally means "Marquis of Wixieng", refers to the tittle bestowed on Prime Minister Zhuge Liang (181-243) by then Emperor Liu Bei (221-263) who founded Chengdu as a capital city. The Wuhou memorial is also dedicated to other heroes of the Shu Kingdoms, such as Chuko Liang, and covers apporxiamtely 37,000 sqm, making it the largest of museums in China displaying relics from the Three Kingdoms period (220-280). Of special interest,the very rare combined enshrining of a King (Liu Bei), and his Chancellor (Zhuge Liang), denotes the reverance afforded to Zhuge Liang. Also known as Kongming, Zhuge Liang is largely known, and revered for his noble character, very high level of inteigence, militery straragems, and engineering inventions such as the wheel barrow, and for greatly improving the design of the repeating crossbow.

Curiously Emperor Liu Bei is described in the famous novel "Romance of the Three Kingdoms" by Luo Guanzhong as being over 7ft tall, or "seven chi, and five cun tall with ears so long they touched his shoulders, and being so large he could see them". Further descriptions of his arms "extending past his knees, a fair, and handsom face with lips so red it appeared as though he wore lipstick", certainly provoke further inquiry of this very interesting, and apparantly visually stirring individual.