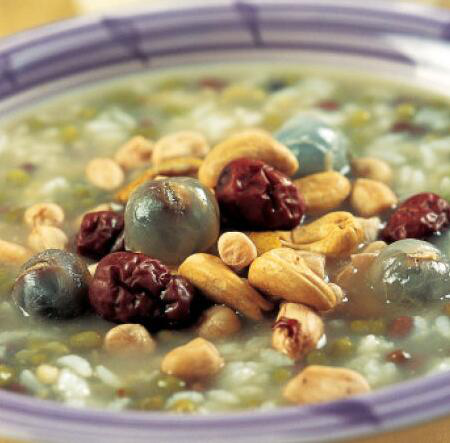 n. Laba porridge, rice porridge with nuts and dried fruit eaten on the 8th day of the 12th lunar month in ChinaThe 12th month of the Chinese lunar year is known as Layue(腊月), and Laba is the 8th day of this month. In ancient times, offerings were made to the gods on this day. Buddhist temples would offer a porridge, and the tradition has become a folk custom. Porridge ingredients include rice, glutinous rice, red beans, peanuts, raisins, chestnuts, jujubes, lotus seeds, and dried longan ect.

1.In the Ming Dynasty about 500 years ago, Laba porridge became such a holy food that emperors would offer it to their officials during festivals.

2.Laba porridge is eight kinds of fresh food and then harvested fruits boiled, usually for the sweet porridge. And certain areas in China cook it as salty porridge with vegetables and smoked meat.